What is a Vegetated Roof?

A vegetated roof or green roof consists of vegetation in a lightweight growing medium placed on top of the drainage layer, root barrier, and waterproof membrane (see Figure 1). Vegetated roofs provide many environmental benefits such as decreased stormwater runoff and reduced building energy use. They absorb air pollutants and provide a habitat for beneficial insects and birds, serve as a sound barrier, and mitigate the urban heat island effect. 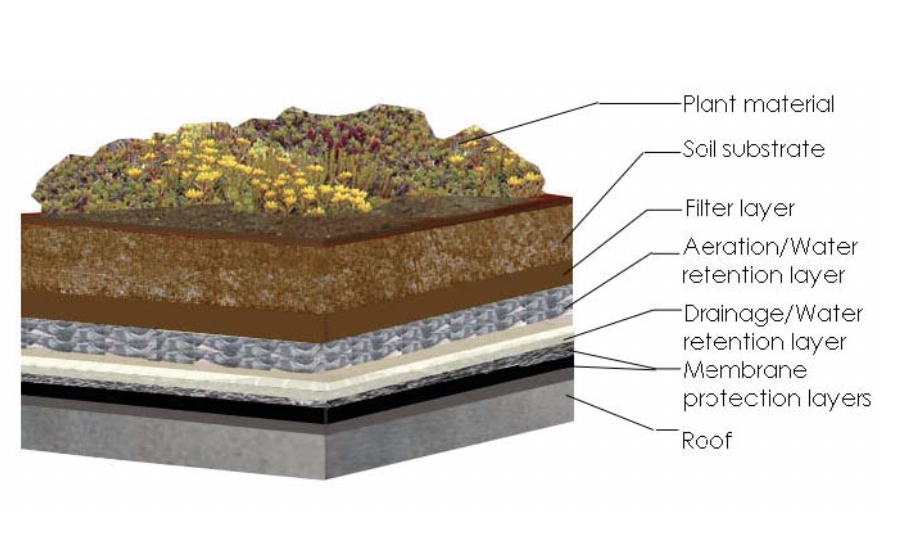 How to How to Incorporate a Vegetated Roof

There are many pre-engineered green roof systems available on the market, but green roof designs are often customized to achieve a project’s specific performance objectives. Consult a design professional and integrate the development of the green roof with the development of the building’s structure and systems. The roof strength must be able to hold 10-25 pounds per square foot above the requirements of an underlying roof.[1]

Vegetated roofs can host a variety of plant species but typically include drought-tolerant species such as hardy succulents, sedums, and perennials. Consider low-maintenance, native species capable of living in the shallow soil. For a list of species indigenous to the Northeast, see NYC Greenbelt Native Plant Center or List of NJ Native Plants by County.

Vegetated roof requires some maintenance such as watering during the establishment period and occasional weeding. Seasonal pruning and cutting of grasses and annual plants reduce the accumulation of combustible material on the roof. Regularly inspect and maintain the components of the roof’s drainage system such as gutters, underdrains, and downspouts.[4]

A vegetated roof can reduce stormwater runoff through retention and evapotranspiration and by slowing the release of precipitation, resulting in reduced peak flows in a watershed and reduced stress on municipal stormwater infrastructure.[6]

Green roofs serve as a carbon sink, helping to offset carbon emissions. Vegetation traps dust and particulate matter as well as other contaminants such as nitrogen oxides.[9]

As the roof system matures, a mini-ecosystem, which supports a variety of beneficial insects, butterflies and birds can develop increasing biodiversity and providing a habitat for native wildlife (see Native and Adapted Plants and Wildlife Habitat).[11]

Like other urban greenery, vegetated roofs provide many intangible benefits for people. Installing a vegetated roof can be a method for integrating more green space into the site and the community. Also, neighboring buildings may gain a bonus view of nature when located near a building with a vegetated roof (see Biophilia). 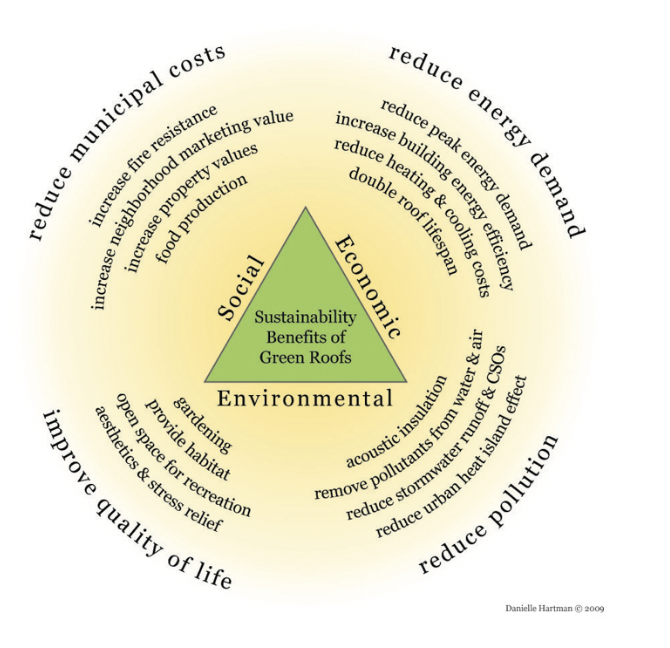 According to the US EPA, estimated costs of installing a green roof average $10/sf for extensive roofing, and $25/sf for intensive roofs. Maintenance costs vary for either type of roof and may range from $0.75–$1.50/sf.[12]

Changing temperatures and UV rays decrease the quality and life of a roof. Vegetated roofs protect rooftops and its structure, decreasing maintenance. Long-term savings from reduced heating and cooling costs and reduced maintenance can help offset the short-term capital costs.[13]

Vegetated roofs can provide thermal insulation throughout all four seasons, reducing energy consumption and reliance on the electrical grid. In the event of a power outage, they can help keep temperatures cool in hot weather and warmer during the heating season. During heavy rainfalls and flooding events, vegetated roofs can help reduce stress on municipal stormwater infrastructure and reduce combined sewer overflows.[14] Vegetated roofs can also offer local communities the opportunity to grow some of their food, reducing dependency on supply chains and transportation networks often disrupted or compromised from storms and other events.

[7] GSA. 2011. The Benefits and Challenges of Green Roofs on Public and Commercial Buildings. https://www.gsa.gov/cdnstatic/The_Benefits_and_Challenges_of_Green_Roofs_on_Public_and_Commercial_Buildings.pdf (accessed Sept 24, 2018).

[14] GSA. 2011. The Benefits and Challenges of Green Roofs on Public and Commercial Buildings. https://www.gsa.gov/cdnstatic/The_Benefits_and_Challenges_of_Green_Roofs_on_Public_and_Commercial_Buildings.pdf (accessed Sept 24, 2018).