This case study summarizes a two-building comparative pilot study by the Rutgers Center for Green Building (RCGB) that looked at occupant response to energy-saving technologies and load shedding in the workplace.[1] The study was part of a more extensive study by RCGB for the Center for Building Energy Innovation and sponsored by the US Department of Energy, which collected additional load shedding and occupant response data on 10 office buildings in the Mid-Atlantic region the following summer.[2]

Why is it important?

For whom is it useful?

The results of the RCGB study are useful for owners and operators, including real estate investment trusts (REITs), of both new and existing commercial buildings that are interested in scalable implementation strategies for managing peak loads and reducing energy and energy costs through load shedding while maintaining occupant satisfaction and productivity.

The RCGB study compared two commercial office buildings, each with different lighting and HVAC energy-saving technologies and load-shedding capabilities. Located in the Mid-Atlantic region, the buildings experience similar climatic conditions. Differences between the buildings include the nature of the tenant, building structure and design, time and scope of retrofit, and the degree of technological sophistication of the building management systems. These differences were intentional to the study design and helped amplify the results and offer an opportunity for RCGB to examine the impact of such variability on occupant satisfaction.

The first case study building, constructed in 2004, is a three-story, 76,692 gross square foot office building of a Mid-Atlantic based REIT with 227 occupants. Although built as a multi-tenant site, the building currently functions as a single-tenanted building. Energy efficiency retrofits to this building included the addition of dimmable, IP-addressable lighting ballasts and low-wattage bulbs; variable frequency drives for selected fans in the packaged HVAC systems; retro-commissioning of the HVAC system; updated controls that include more sensor and control points; and links to an enterprise-wide system supporting remote monitoring and control of building systems. This retrofit provided the building operator with sophisticated load shedding capabilities, among other features. 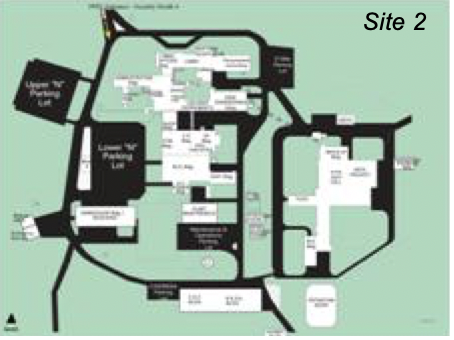 The second case study building is a multi-building complex of 755,540 square feet of office space, laboratories, experimental research areas, and technical shops, housing over 450 employees. Although operated as a single facility, it was built over several decades starting in 1960 and comprises 35 buildings varying in age and building envelope design. It contains several independently operated HVAC and electrical systems. This building’s systems are much less tightly integrated than those in Building 1 but had a history of load shedding practices.

RCGB employed a quasi-experimental research design using data collected through a series of participant surveys to assess building occupants’ reactions to energy-saving technologies in their work environment. The goal was to determine the range within which energy-saving decreases in temperature control and lighting brightness still offers a comfortable environment conducive to productivity and satisfaction.

Each of the two case study buildings underwent a series of load-shed events in which cooling and lighting were decreased by a preset amount from baseline conditions to test the effect of load shedding on occupant evaluations. In this study, baseline conditions referred to parameters established by building management for temperature, lighting, and airflow that provide appropriate working conditions while maximizing efficiency and minimizing energy costs. Load shedding represented a change in these conditions.

In Building 1, the decreases ranged from five to fifteen percent (see Table 1). In Building 2, the decreases entailed switching to weekend lighting in the hallways and turning the HVAC system off. The study surveyed participants on days when the building was operating under the normal energy load (control days) and during load shed days, and these measurements were compared to detect changes in responses. Note that we should view this data collection as a pilot study as conditions for and timing of the load shedding were evolving even as instruments were being developed and tested on site, resulting in data collection from a relatively small number of testing days and research subjects.

Participants also completed a comprehensive survey which assessed their level of satisfaction and concerns about environmental factors in the workspace, including air flow, temperature, and light, ability to alter and control the environment, choice of adaptive behaviors resorted to when environmental features do not meet needs, as well as perceived productivity and overall job satisfaction. The survey took place during the shoulder season, in the early Fall, and again during the Winter in a shorter follow-up format. The research questions asked whether these changes produced noticeable responses from the occupants in how they felt about ambient conditions in the workplace. 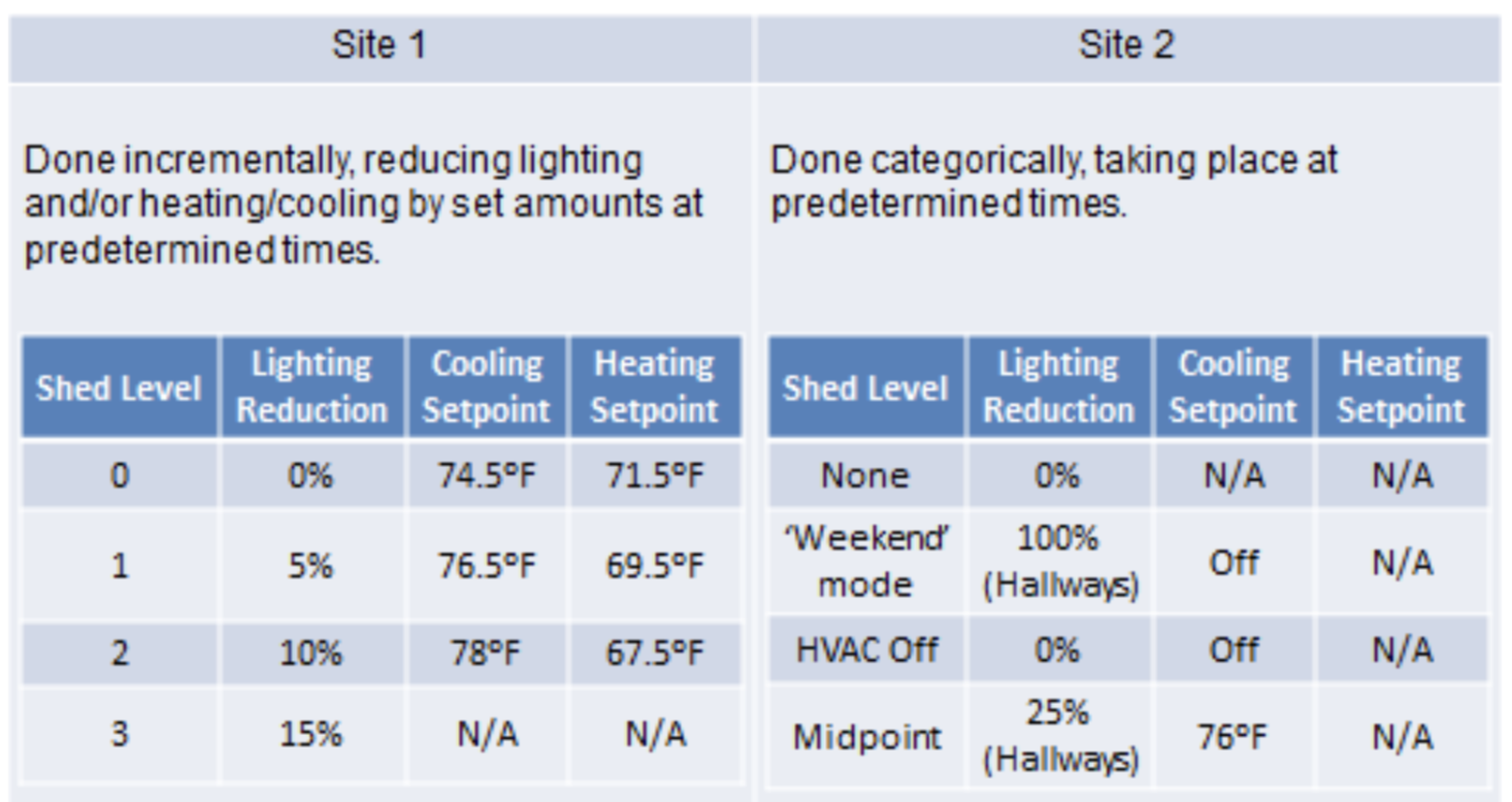 The findings suggest characteristics of buildings that are more conducive to load shedding perceived as acceptable or even viewed positively by building occupants, and the extent to which typical office buildings may be overcooled during the summer and shoulder months.

In both Building 1 and Building 2, RCGB found substantial and, in several cases, statistically significant changes between control and load shedding days on items that address well-being, productivity, and satisfaction. Most interestingly the direction of the changes was consistent within each building but strikingly different between the sites. Specifically, occupants of Building 1 rated the environment as getting better whereas occupants in Building 2 rated the environment as getting worse (see Figure  3). 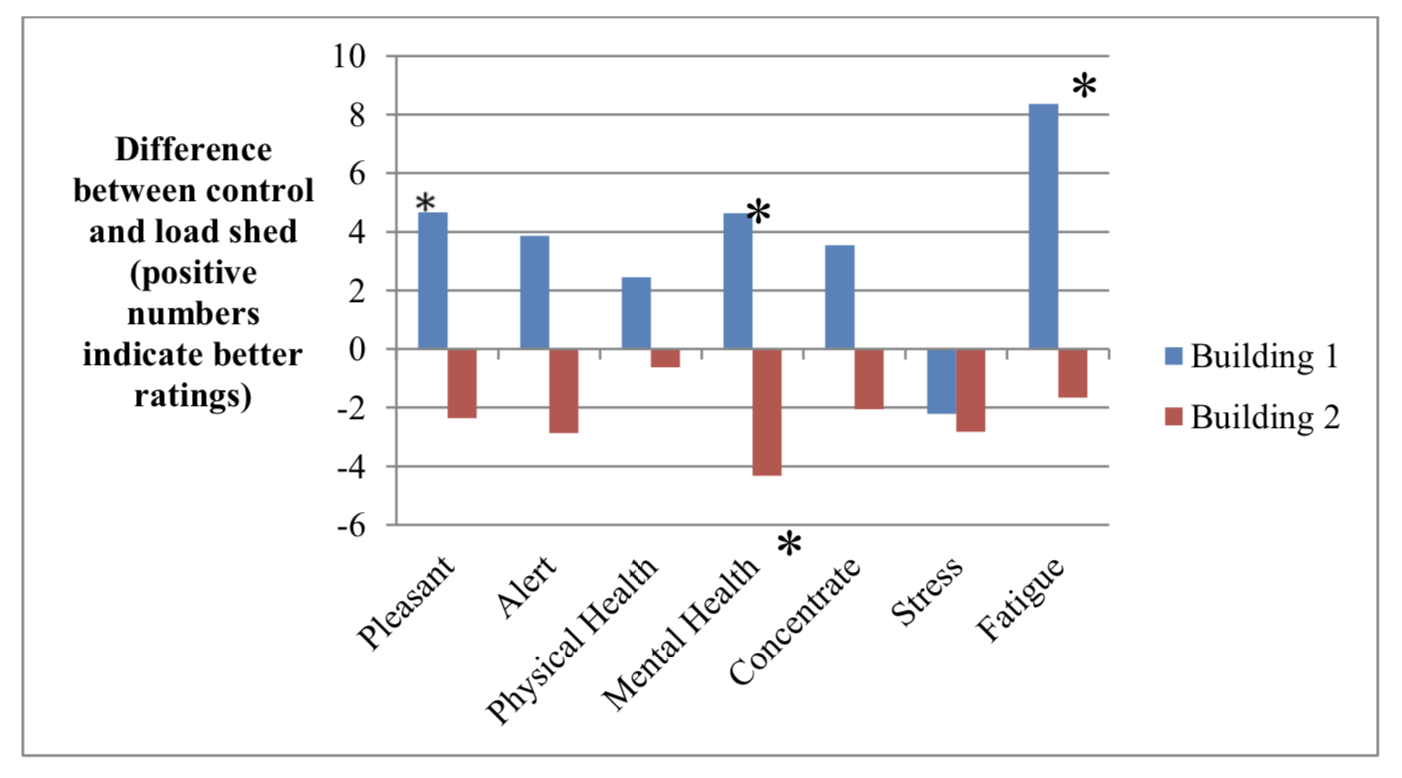 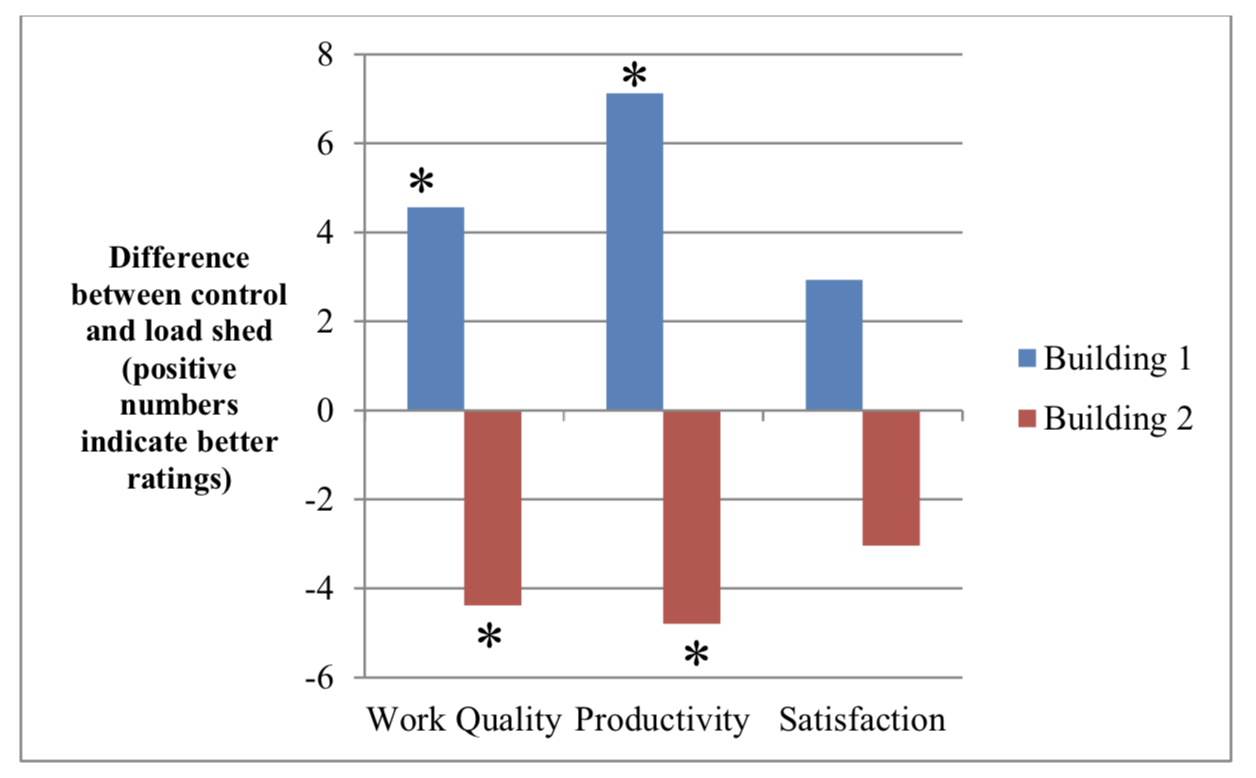 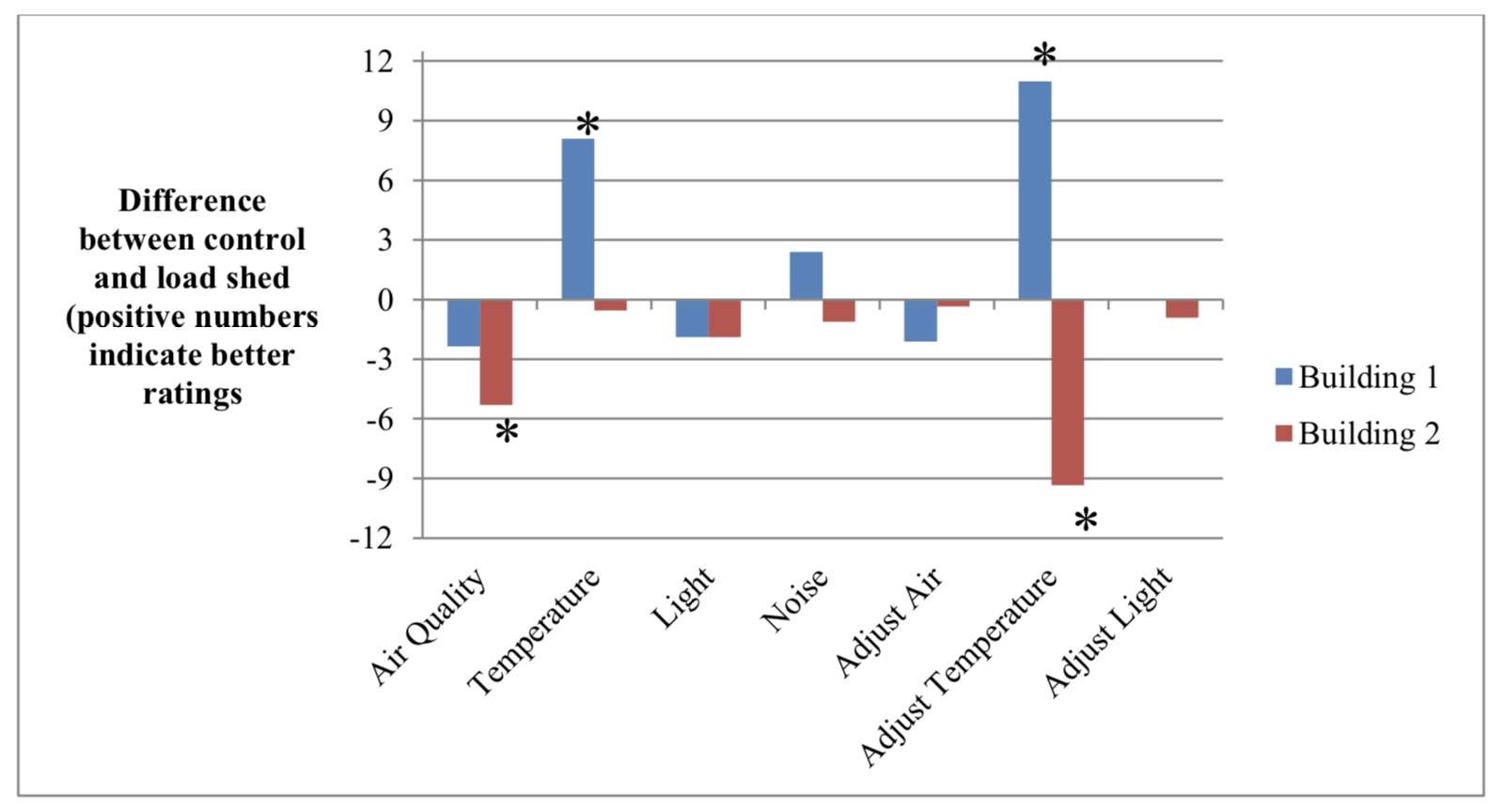 Overall for both buildings, load shedding has a noticeable effect on well-being, productivity, and satisfaction with one’s environment. In Building 1 load shedding leads to improvements in indicators, while in Building 2 the effects are adverse.

The difference in response among the two building also likely stems from the type of load shed implemented and characteristics of the building envelope. Building 1 had sophisticated, fine-grained control systems and was able to adjust the cooling setpoint degree by degree while Building 2, merely shut off cooling systems and ventilation. Also, Building 1 was a medium-sized office building that was newly retro-fitted with a well-insulated building envelope, which helped to buffer temperature fluctuations during the load shedding events and bring the temperature back to pre-load shedding levels more efficiently compared to Building 2. The second building was a much larger and older facility with a more diverse and less tightly-integrated building envelop that spanned across multiple building sections, which likely contributed to more significant and more extended temperature changes, that in turn, were more easily detectable by building occupants compared to the shorter and less pronounced temperature changes experienced by occupants in Building 1.

A second important finding relates to the extent to which these (and many other) buildings may be over-cooled in summers. Especially given that occupants preferred somewhat warmer temperatures (Building 1), reducing the extent of over-cooling, where it occurs, could save energy – not only during load-shedding events but on a regular basis.